"The Bass Rock, with Gannets"

This is an original acrylic painting of the Bass Rock, off the coast of North Berwick in East Lothian, Scotland. It is home to one of the world's largest gannet colonies and this painting was inspired by a recent boat trip out to the Rock, to view the gannets, during their nest building season in early summer 2019. It is a wonderful experience and the sheer joy of nature is great to see (even if it was a bit rainy on the day). I've tried to capture the feeling of space and sky and the birds whirling around, in my colours and the energy of the brushstrokes. Painted in professional quality acrylic paints (Golden Open brand), on stretched canvas. Could be hung as it is or can be framed if preferred.

This year I was lucky enough to visit Japan and these four paintings are inspiredby my travels there, especially visits to the Okayama gardens, Todai-ji temple in Nara, and Kikaku-ji (the "Golden Temple") in Kytoto. As you can tell, I was particualrly fascinated by the shapes of some of the trees! I also decided to try out a 'lighter than usual' colour palette for these paintings, perhaps in response to the strangeness of being in such a different and faraway land.

Inspired by a walk on Ayr beach in Ayrshire, on a very blustery January day. 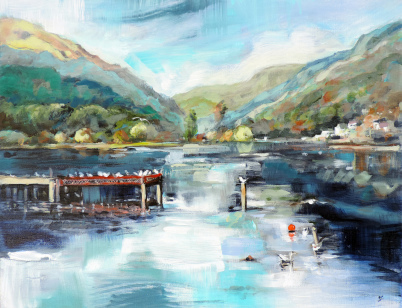 I visited Arrochar, at the top of Loch Long, on the Roseneath peninsula in Argyll, last year. From an information board nearby I was astonished to read that there used to be three steam boats per day stopping at this pier in the 1890s, during the heyday of Clyde steamer tourism in Argyll. Tourists used to take a steam boat up Loch Long, where they could disembark at Arrochar and be transported overland by road to Tarbet, to take another steamer tour on Loch Lomond. When rail tourism took over, and the First World War caused the boats to be requisitioned for war use, the days of the steam boat tours were numbered and by the 1970s the pier gradually went out of use and has since been left to the elements. It's now just a ruin marooned in the water, enjoyed by the seagulls as an interesting lookout perch. However, the landscape behind remains timeless and has probably looked the same for centuries. I made a watercolour sketch on the spot, on which this studio painting is based. Painted in professional quality acrylics (Golden Open) and varnished to protect from dust and UV light. 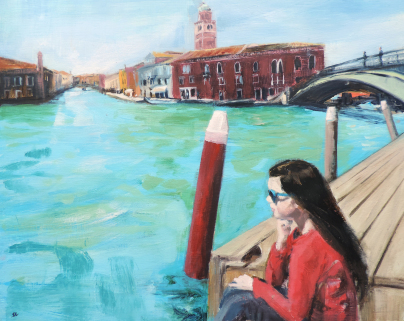 Acrylic on cradled MDF board 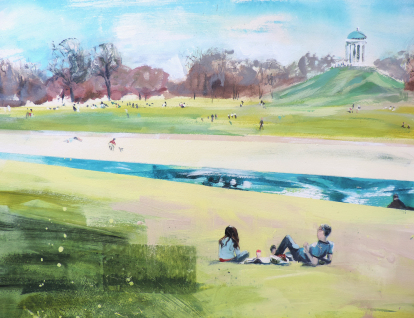 "In Munich", acrylic on paper (SOLD) 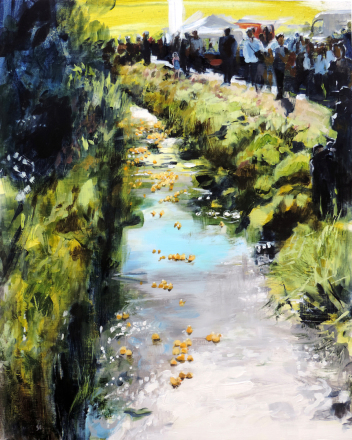 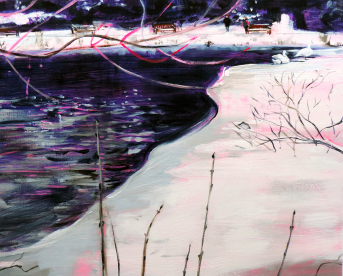 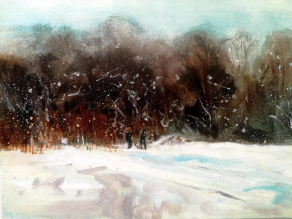 Previously on show at McNaughtan's Bookshop, Edinburgh, 22 Oct to 23 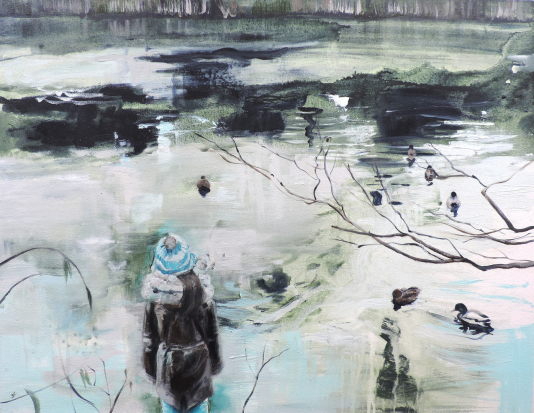 From solo exhibition at Embo Deli, Edinburgh, in 2017

(NB All these paintings are now SOLD)

These paintings were created as a series of works all based at the same location, a rocky beach adjacent to Culzean Castle, in Ayrshire ( in the Sout West Coast of Scotland), a place I knew well from my child hood.  I wanted to capture the reality of a family walk on the beach in Scotland in January - the crisp clear light but with everyone wearing coats and hats. I am most interested in watching the children as they engage with the environment - often entering a "flow" state in which they are oblivious to the goings on around them as they are immersed in an inner world. 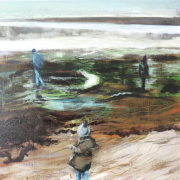 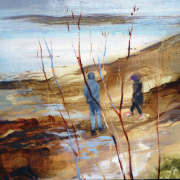 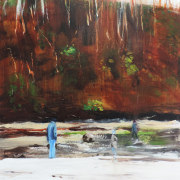 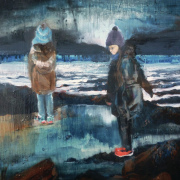 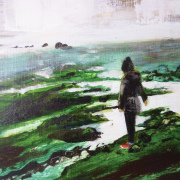 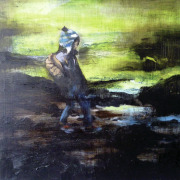 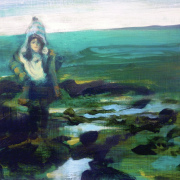 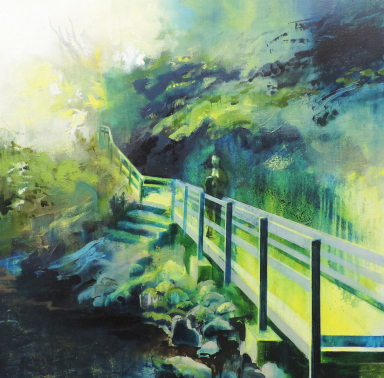 This painting was inspired by a woodland walk to a waterfall in Golspie, a small village near Brora in Sutherland (in the Scottish Highlands). The wooden boardwalk meandered through overhanging leafy green trees which created a beautiful atmosphere and light.

This a large painting (100 x 100cm) on canvas, painted with acrylic underlayers and then water-based oil paint on top, giving an interesting textural surface with some sheen.